In early April, the notoriously smoggy skies of Los Angeles were among the clearest in the United States. At the same time, people in Northern India could glimpse the Himalayas in the distance for the first time in decades.

Normally, this should be a cause for celebration. But not this year. The cleaner air and water are just a side effect of COVID-19, and most experts predict a quick return of smoggy, dirty air once the world’s economic engine roars back to life.

The arrival of Earth Day 2020 gives us the chance to pause and look beyond this pandemic toward our other collective fight, the one against climate change. A brief moment to explore how we can create a green recovery and a future where clean air and water are not just the short-term, silver-linings of future natural disasters. 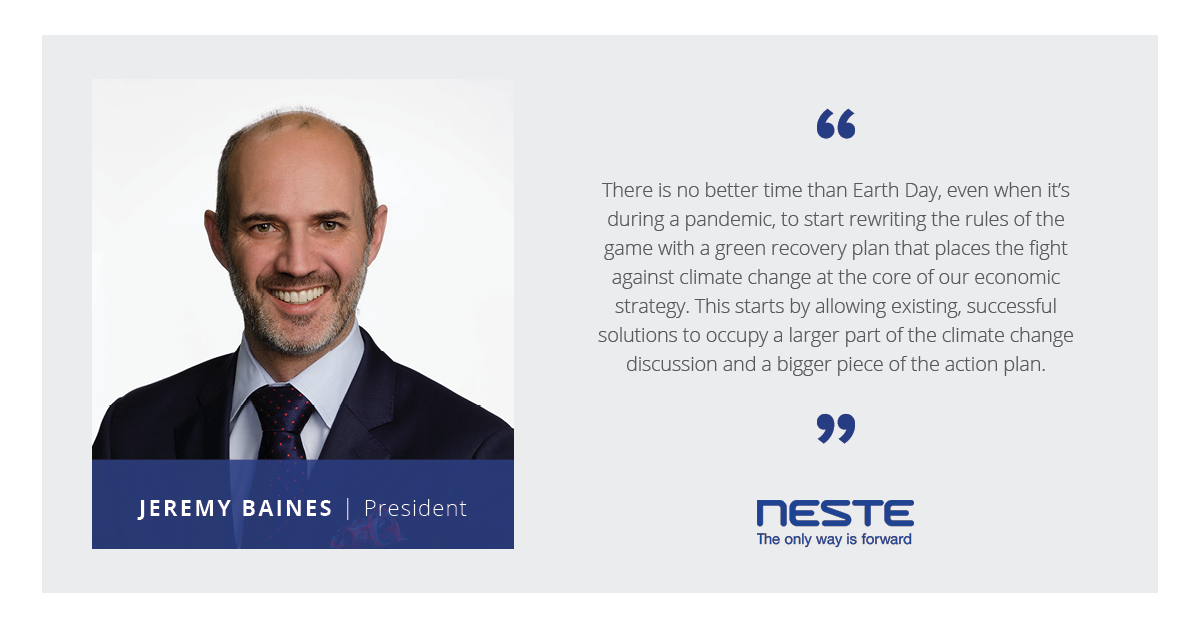 The good news is the tools to fight – and prevent – catastrophic climate change exist. Using these tools effectively, though, requires a deeper understanding of the challenges and opportunities within our energy and political system.

When it comes to energy, we can't fall into the trap of believing that the electrification of passenger cars will be equally effective for heavy transport, air travel or other industrial operations.

Take, for example, commercial trucking. Data from BloombergNEF predicts that less than 20% of heavy trucks will be zero-emission by 2040.

While there is currently a slump in air travel due to the pandemic, all signs point to a future with more planes in the sky. Many of those planes will still be fueled by kerosene, because zero-emission air travel will not be attainable until the 2040s (if then).

The same story can be seen with buses, tractors, cranes, and other heavy equipment.

The sustained drive from some businesses, nonprofit organizations and governments to electrify parts of the transport sector that are, by definition, hard to electrify only preserves fossil fuel’s market share by ignoring other proven low carbon solutions. Refiners know this, and have been ramping up production of diesel and jet fuel.

As I mentioned last fall when speaking to Congress, advanced biofuels made from 100% renewable materials can reduce carbon emissions today from these hard-to-abate sectors.

For example, renewable products made by Neste prevented more than 9.6 million tons of CO2 equivalent from entering the atmosphere in 2019. An advanced biofuel like Neste MY Renewable Diesel emits up to 80% less carbon dioxide and pollutants compared to its petroleum counterpart.

It’s a fuel made from used cooking oil, greases, and rendered fats - not crude oil. On the horizon, a new wave of raw materials, from algae to forestry waste to winter cover crops to even converting power to liquids, could further reduce the carbon intensity of renewable diesel and other advanced biofuels.

In markets where an advanced biofuel like renewable diesel is available, the only thing a city or business needs to do is choose to kick the oil habit and switch. No new engine, and no waiting for new fueling or charging infrastructure.

When it comes to effective climate change policy in the U.S., a Low Carbon Fuel Standard (LCFS) has shown to be effective at reducing carbon emissions in transportation. It provides a market-based solution, creating an even playing field for all fuels to compete. Imagine a ruler. But instead of inches or feet, this ruler measures carbon intensity (CI) scores for fuels. Somewhere on that ruler is a threshold CI score. Companies producing fuels with a CI below the threshold generate credits. Companies producing fuels with a CI score above the threshold must buy those credits.

The cost of reflecting the true cost of carbon under a LCFS? About the same as switching from an unbranded, low-grade diesel to premium.

The benefits? Cleaner air, fewer carbon emissions, and a wave of innovation and sustainable jobs not subject to the oil industry’s boom and bust cycle.

For those claiming to be serious about fighting climate change, that means stepping up and showing support for the expansion of LCFS programs.

Eventually we will overcome COVID-19 and re-ignite the engines of progress. Planes, trucks and other heavy equipment will start running again full throttle, but COVID-19 has shown that ignoring facts and deferring action, or going with old beliefs, will only lead to huge repercussions—and we must be wary.

There is no better time than Earth Day, even when it's during a pandemic, to start rewriting the rules of the game with a green recovery plan that places the fight against climate change at the core of our economic strategy. This starts by allowing existing, successful solutions to occupy a larger part of the climate change discussion and a bigger piece of the action plan.

That way, those clear skies can get the celebration they deserve on Earth Day 2021.

Jeremy Baines is president of Neste, US Inc., (www.neste.us), a subsidiary of Neste, a Finland-based multinational petroleum, renewable fuel, and renewable polymer and chemicals company. In 2020, the Corporate Knights Global 100 ranked Neste as the third most sustainable company in the world.