I am now looking at successful results from a quite comprehensive approval program that our newly developed wind turbine gear oil formulation has passed.

To bring a new type of gear oil for wind turbines to market is not an easy task. The outdoor conditions, difficult access to service as well as the demanding mechanical requirements make this one of the most challenging lubricant applications in the industrial sector. No surprise that the approval process is quite demanding starting from passing the basic tests in the industry standards, such as DIN 51517-3, and ending up in the evaluations against the leading OEM requirements including bearing and gear box manufacturers. Then you only have in your hands a fluid which potentially works well up there in the wind turbine. This of course needs to be proven and a field trial takes another two years. Not to say that it takes maybe a bit more from a newcomer to assure the market about a completely new base oil concept. Descriptive of this market is that it has been dominated by a couple of fluids based mainly on fully synthetic high viscosity PAO base oils already for some time. The market is also expected to more than triple in volume during this decade.

So why would a group III base oil producer start to look into this market? I have been eyeing potential applications in the energy industry that could take advantage of the high VI, good thermal and oxidative stability and a good additive response brought by the highly saturated isoparaffinic composition of group III base oils that make them the base stock of choice for the crankcase oils in the car industry. Highly demanding industrial gear oils are an obvious possibility but the viscosity of group III base oils is too low.

One step forward was taken almost two years ago when Neste Oil-Bapco JV more than doubled Neste Oil's group III capacity and, more importantly, multiplied its capacity to produce the heavier 8 cSt base oil making NEXBASE® 3080 finally truly globally available. Another step forward was taken when during one conference we started talking with colleagues from Evonik, who brought in VISCOBASE®, a share stable PAMA (polyalky methacrylate) that could bring the viscosity up to the required level. The fit was found not only in the good compatibility of the base stocks but also in the aims and philosophies of the producing companies. The good technical results and cooperation encouraged us to initiate jointly an approval program for the wind turbine, the flag ship of gear oils to show the market the ability of this new cost efficient base oil concept.

Now, when looking at the results from extensive testing that show excellent bearing and gear protection, good sealing compatibility and oxidative stability and gain approvals from OEM's like FAG and Winergy, I can't wait to get field trial data and tell the market more about this new base oil concept. 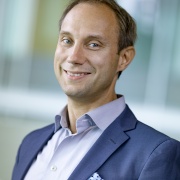