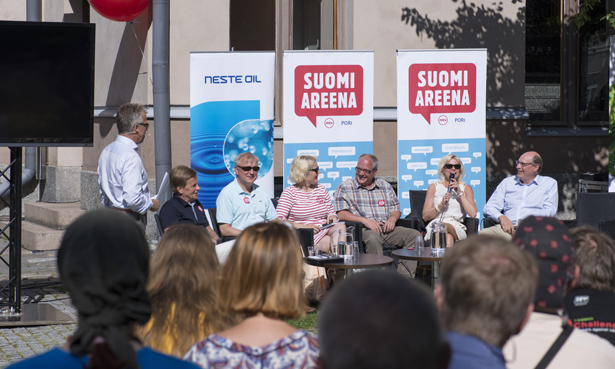 The potential offered by environmental technology and the significance of climate commitments were high on the agenda at the panel discussion hosted by Neste Oil at the SuomiAreena event in Pori this July. The debate, which took place outside the local town hall, featured parliamentarians, politicians, and Neste Oil’s President & CEO, Matti Lievonen.

“Climate change is a real business opportunity for Finland,” according to President & CEO Matti Lievonen, speaking at the SuomiAreena debate on climate and energy policy in Pori on Friday, 18 July. He encouraged Finns to take a pioneering role in the area.

“Finland should lead the way and only use environmentally friendly fuels,” he continued.

The event was hosted by MTV3 news anchor, Keijo Leppänen.

Matti Lievonen, Matti Pekkarinen, and Miapetra Kumpula-Natri underlined their belief that switching to clean energy will spur both innovation and growth.

Resources will have to be committed to encouraging the switch-over to renewable energy according to Mauri Pekkarinen, but Finland needs to understand the responsibility it bears here as a significant per capita polluter.

“Above all, doing so will enable us to develop technology that will promote Finnish industry and business, and Finnish exports – and generate employment, revenue, and prosperity,” he said.

Miapetra Kumpula-Natri and Pia Kauma emphasized the importance of cleantech.

“Environmental technology offers a number of employment opportunities for Finland, but we will also need to invest in training and education in this area as well,” said Kauma.

Rehn: “Everyone needs to join in” Olli Rehn, who recently stepped down as the European Commission Vice-President responsible for Economic and Monetary Affairs and the Euro, underlined the importance of ensuring that Finland has sufficient researchers, experts, and personnel in the environmental field, as the bioeconomy is becoming an increasingly important part of the Finnish economy.

Saying he felt that he was also speaking on behalf of other companies in the field, such as UPM, St1, and Gasum, Matti Lievonen responded to comments from the other participants in the debate:

“We really have the technology that’s needed. It’s positive to see that politicians here in Finland and in the EU see the opportunity this represents.”

Rehn added that the EU could be justified in setting even more ambitious targets for halting climate change, which prompted Kaj Turunen to question whether the EU’s competitiveness could survive tougher climate change commitments.

“We need to act carefully here and ask ourselves whether it makes sense for Europe to set even tougher targets if they are not also set globally. If industry in Finland and Europe moves to other countries, jobs will suffer,” he said.

Everyone needs to join in, according to Rehn.

“We could start walking on our heads here if it would help, but if the rest of the world doesn’t join in it won’t slow climate change or improve the state of the environment."

Prior to the start of the debate, Matti Lievonen outlined what Neste Oil has already done to help mitigate the effects of climate change.

“A good example of this is our renewable diesel, which enabled us to reduce greenhouse gas emissions by 4.8 million tons last year, equivalent to 40% of total traffic-related emissions in Finland.

“We’re doing the right things and doing them on a major, high-profile scale. We’re also the only truly global biofuel producer today; the others in the field are local players.”

Neste Oil has also been active in advocating the benefits of its approach to the authorities and others, said Lievonen.

“We contribute through things like explaining what can be achieved in a given timetable, for example.”

The targets set for 2020 are already clear, he said, and Neste Oil now wants to focus people’s attention on those for 2030, which are still very much in the development stage.

“This is important from an investment standpoint, as it will determine how willing companies will be to invest in the future.” Lievonen returned to this and the role of political decision-making during the panel discussion.

“Wind power and solar energy, for example, both call for massive investments in new infrastructure. Our approach, in the shape of renewable diesel, on the other hand, doesn’t require any new infrastructure, as it’s compatible with vehicles of all ages. These issues need to be taken on board by the Commission as it moves forward.”