Arctic conditions, vans, and automotive industry experts come together in the Arctic Van Test, Finland’s most international vehicle test organized by Auto, tekniika ja kuljetus, the country’s largest, professional motoring and logistics magazine. The test compares a range of different vans and how they perform in the Nordic winter, their fuel consumption, and their overall usability. Neste Oil’s recently launched Neste Pro Diesel, the cold weather king, was this year’s official test fuel for the first time. Neste Oil stations also served as stop-off points along the route from Helsinki to Pudasjärvi in the north of the country.

What gets manufacturers, importers, and the trade press to meet up every year in Pudasjärvi?

According to Heikki Laurell, responsible for coordinating the Arctic Van Test, the tough conditions are the big draw.

“Tests carried out in true winter conditions are always an important part of development work on new vehicle technology. This event has been organized for more than 20 years now and we’ve attracted a core group of enthusiasts with a common interest in pushing vehicle technology forward and improving vehicle performance.” 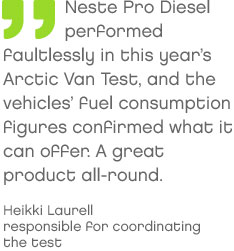 The 2014 test consisted of a number of stages. When the first few of these had been completed in Southern Finland, the group of eight vehicles and 30 people involved this year headed off up north to test themselves against the tougher conditions there. The rest of the trials were carried out at Pudasjärvi Airport, which offers around 3.5 kilometers of track for assessing things like electronic stability control systems, slalom testing, and cornering performance.

More than 10 vehicle and transport press representatives from around Europe took part. Some of the tests were based on figures collected from measurement equipment and some on the hands-on experience of the drivers. The differences between the various vehicles tested proved small, but highlighted the value that the latest technology can provide in terms of vehicle economy and safety. The winning vehicles will be announced in March.

“It’s not always easy to measure all the properties of different vehicles, and so some of our results depend on the hands-on experience of our drivers,” says Pentti Mustonen, one of this year’s organizers. “Our test drivers are more experienced than the average driver and generally have extensive experience of driving vans and trucks. Some of them also have competition experience.”

Neste Pro Diesel proved what it can offer

This year’s conditions were not the toughest ever encountered on the test, as the temperatures at Pudasjärvi were only around the -5 °C mark this February. Neste Pro Diesel would have had no problem coping with temperatures down to as low as -37 °C, according to Tuukka Hartikka, one of Neste Oil’s engine researchers.

“Neste Pro Diesel performed faultlessly in this year’s Arctic Van Test, and the vehicles’ fuel consumption figures confirmed what it can offer. A great product all-round,” according to Heikki Laurell.

Tuukka Hartikka was not surprised by the results, as Neste Pro Diesel has been comprehensively tested by VTT Technical Research Centre of Finland, the Tampere University of Applied Sciences, and Neste Oil’s own Engine Laboratory.

Neste Pro Diesel attracted a lot of interest among the international members of the test team, particularly because of its bio-component. Fuels like Neste Pro Diesel containing a minimum of 15% renewable diesel are a rarity in many Northern European countries where fuels are expected to perform well in cold conditions.

For more information about the Arctic Van Test:

For more about Neste Pro Diesel: