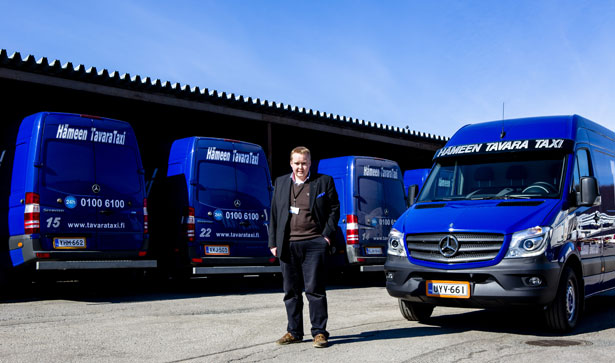 Ville Mäkinen of Hämeen TavaraTaxi, a transport company specializing in same-day deliveries, is a definite convert to Neste Pro Diesel. And for good reason, because his company ran a unique six-month field trial beginning in November last year that compared two pairs of MB Sprinter vans running on different diesel under real-life conditions on the road.

“We picked two pairs of identical vehicles and filled up one from each pair with regular diesel and the other with Neste Pro Diesel,” explains Mäkinen.

The variables in the trial were standardized as much as possible, with both pairs of vehicles operating on basically the same routes. The fuel was switched about three months into the test to compensate for any differences between the individual vans.

No real comparable data covering the size of van operated by Hämeen TavaraTaxi existed before the trial, which has made the company something of a trailblazer in this respect.

The consumption data collected during the trial left no room for doubt about what Neste Pro Diesel offers, according to Ville Mäkinen.

“We saw savings of an average of around 1 l/100 km using Neste Pro Diesel in our Sprinter vans,” he says. “That’s why we’ve stuck with Pro Diesel as well.”

Hämeen TavaraTaxi launched the trial for environmental reasons, as well as fuel consumption-related ones. Mäkinen’s father, Jorma Niemi, founded the company in 1992 and it emphasizes environmental values in its strategy.

“Comparing things is part of our environmental work to ensure that we make efficient use of all our resources. The trial showed that environmental values and financial ones do not have to be mutually self-exclusive. Using Neste Pro Diesel reduces fuel consumption and saves not only money, but the environment as well,” says Ville.

“And the saving comes for free too in practice.”

Hämeen TavaraTaxi currently employs 40 people and runs 25 large vans, which clock up around 60,000 kilometers a week and make around 800 customer deliveries a day.

“Our deliveries range from letters to 15 pallets of brochures or flyers,” says Ville Mäkinen.

The company is growing at 16% a year at the moment. More vehicles are on order and the company’s fuel bill is also on the increase, inevitably. Choosing the best fuel for its vehicles can help here.

Hämeen TavaraTaxi’s vans typically use 10-15 l/100 km, and reducing fuel consumption by 1 l/100 km represents a saving of 7-10%. For a company this size, this translates into annual potential savings of tens of thousands of euros.

“We spent over 314,000 euros on fuel during the last financial year, so you can see the scale of expenditure we’re talking about.”