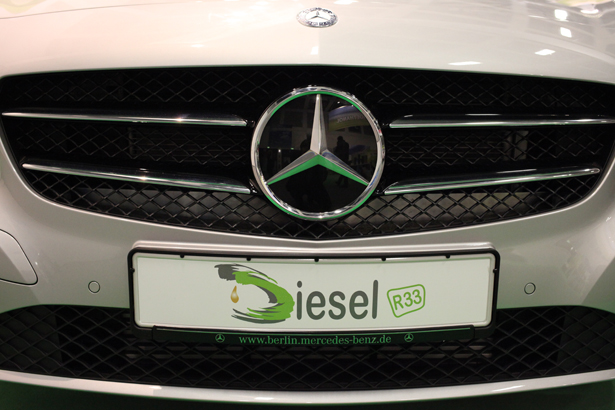 The biofuel industry filled an entire hall at the world’s largest agricultural and garden fair in Berlin this January. Neste Oil and its partners were on hand to update the 410,000 visitors to the International Green Week about their new Diesel R33 blend.

“It’s important to tell German consumers and political decision-makers that Neste Oil is able to supply a renewable diesel fuel that is fully compatible with existing vehicle engines – and that it’s possible to include a much larger proportion of renewable content than the current 7%,” says Sebastian Dörr, who is responsible for Neste Oil’s Diesel R33 project in Germany.

Diesel R33 is currently being trialed in a demonstration project involving 280 vehicles – including buses, cars, and trucks – in Coburg in Bavaria aimed at commercializing the fuel.

“In addition to vehicles supplied by our partners, Volkswagen and Audi, the trial also covers a number of ordinary privately owned cars as well,” says Professor Jürgen Krahl of the Coburg University of Applied Sciences, the head of the research project. “We’re currently carrying out tests on tailpipe emissions and motor oil performance, and testing how compatible the fuel is with the particulate filters fitted to modern diesel engines.”

“Fuel plays a decisive part in extending the recommended intervals between regular vehicle service and reducing CO2 emissions, and we believe our cooperation with Neste Oil will help us in our work in this area,” says Jens Hadler, Chief Engineer at VW’s Engine Research Department.

The future in your tank

Rolf Busse, from the North German Agricultural Centre in Lower Saxony, was one of those to visit the R33 stand.

“As a farmer, using a clean fuel in my tractor is important. This new fuel meets all the norms required for fuel today in Europe, and clearly has a future in my mind,” he says.

“If production and distribution can be extended sufficiently, farmers like me in Lower Saxony will be more than ready to fuel up our tractors with Neste Oil’s renewable diesel.”

Over 53 million vehicles can be found on the road today in Germany, Europe’s largest road user. More than 42 million of these are cars.

“Producing fuel from organic materials is a really good thing, I think,” says Norbert Schulz, another of the visitors to Neste Oil’s Green Week stand. “Sustainable development must be prioritized, even if this type of fuel costs a bit more.”

Thanks to its low level of emissions, Diesel R33 is ideal for urban use. The central areas of many of Germany’s largest cities have been designed special environmental zones, and vehicles entering the center of Berlin and Munich, for example, are required to display an environmental sticker on their windshield indicating their vehicle’s particulate emission category.